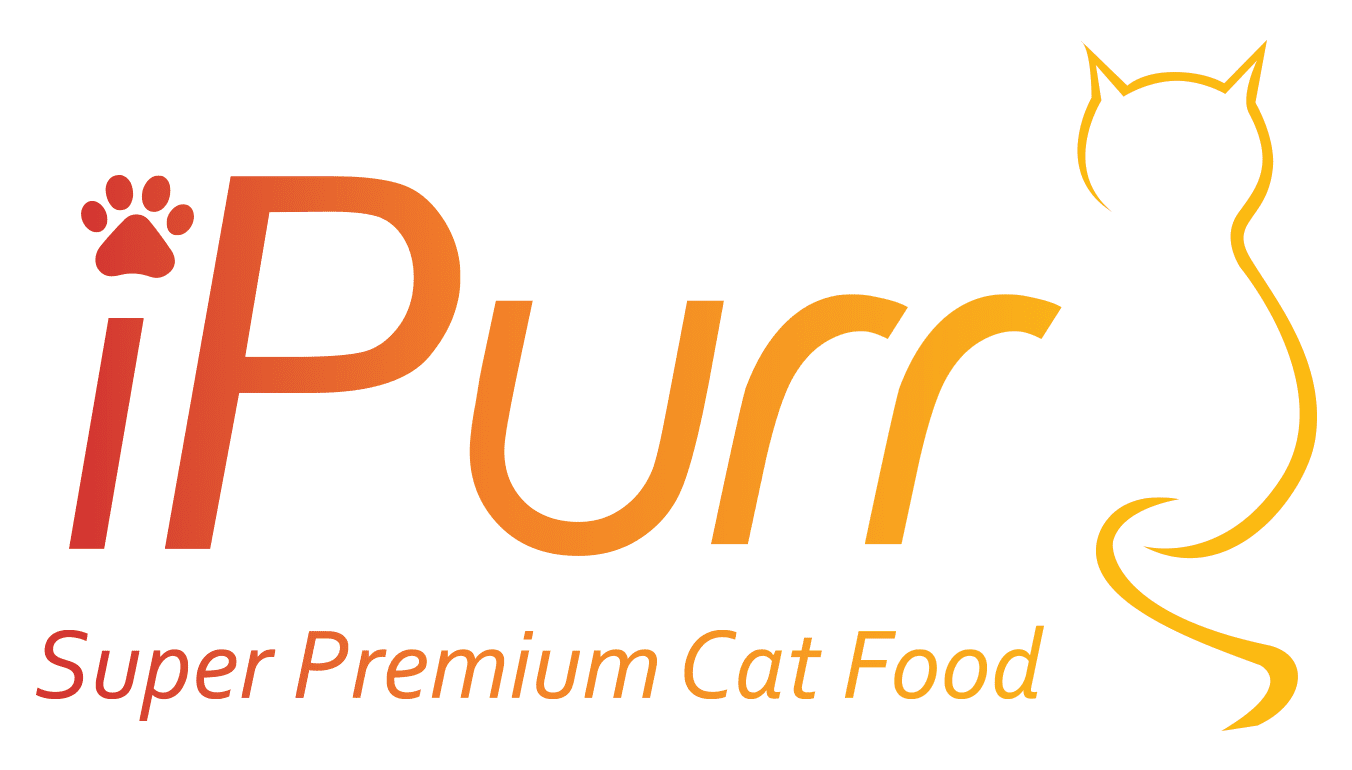 They may sound like something out of Alice in Wonderland, but purple carrots are not only real, they’re being positioned as the ultimate super-food. A new Australian study (video below) has shown the ancient carrot variety is high in anti-inflammatory properties and antioxidants that are stabilising bodily functions.

”They’re the original carrots, from ancient Persia,” explained the study author Lindsay Brown, professor of biomedical sciences at the University of Southern Queensland.

Purple carrots are one of a vast range of fruit and vegetables almost lost in the age of single supermarket varieties. Claims have long been made about purple carrots’ health benefits, but until recently these remained untested.

Professor Brown conducted a pre-clinical trial on rats, using purple carrots grown in Queensland. For 16 weeks, the rats were fed a high-fat, high-carbohydrate diet designed to mimic the effects of an unhealthy western diet. The rats quickly put on excess weight, developed high blood pressure, became glucose intolerant (or pre-diabetic) and incurred liver and heart damage. Then, for the second eight weeks, the scientists added purple carrot juice to the rats’ food.

The results that were published in the British Journal of Nutrition surprised even the researchers. 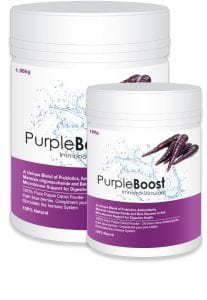 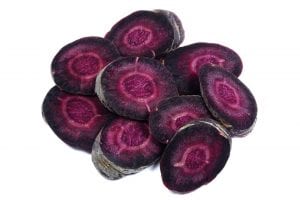 Ask A Question
“Everything Went Back To Normal!”

There are up to 28 times more anthocyanins the antioxidant that creates the purple-red pigment in blueberries and raspberries and especially in purple carrots than there are in orange ones. We have included an interview of Dr Lindsay Brown, professor of biomedical sciences at the University of Southern Queensland and additionally information from professor Virginia Walbot Standford University Biology Department detailing anthocyanins and their effects on the body.

Please read the science results published in the British journal of medicine.

At Performadog and iPurr, we believe in eating the very best food we can, that includes providing our pets with the same opportunities.

So we have prepared 100% purple carrot powder, mixed it with Pre & Probiotics and we call it ‘Purple Boost’, to provide the very best health benefits for your pets. It is an Immuno-Stimulant and has a unique Blend of Probiotics, Antioxidants, Mannan oligosaccharide and Beta Glucans to aid Microbiome support for digestive health.

So, what’s so special about purple foods in particular?

They are full of antioxidants called anthocyanins, and they have hit the headlines because they are linked to a range of health benefits.

Allow Us To Reveal What They Are:

A mannan rich fraction from yeast

No Colouring or Flavouring

Because anthocyanins are antioxidants, they can fight against oxidative damage – something that is known to contribute to brain ageing and memory impairment.

Purple carrots are rich in beta carotene, which improves memory and verbal skills. The plant compound luteolin in carrots has been found to reduce age-related inflammation in the brain and associated memory deficits. Anthocyanins cross the blood-brain barrier and impact the areas of the brain involved in memory and learning.

A six-year study published in the Annals of Neurology looked at the effects of eating anthocyanin-rich foods (namely strawberries and blueberries) on cognitive function in older women aged 70+. After studying 16,000 patients, the researchers discovered that this antioxidant could delay mental ageing by up to two and a half years.

They also found that the higher the intake of anthocyanins and other flavonoids, the slower the rate of cognitive decline.

But these particular antioxidants don’t just slow down the mental ageing process; they also boost learning and memory.

In 2009, a study on ovariectomised rats (those with their ovaries removed to mimic post-menopausal symptoms) showed that those treated with anthocyanins displayed improved learning and memory functions when compared with those that didn’t consume any anthocyanins. In previous research, the same scientists demonstrated that anthocyanins inhibited depression-like symptoms in the same animals.

Be kind to you and your pet’s liver by eating a wide variety of anthocyanin-containing foods.

When a 2010 study looked at the effects of anthocyanin-rich extract from black rice on rats with chronic alcohol-induced liver damage, the results were promising.

Rats were divided into two groups and administered alcohol to cause liver damage. However, one group was also given anthocyanin. Those given the antioxidant had lower levels of liver damage induced by the alcohol, pointing to anthocyanin as a possible way to reduce the effects of toxins on the liver. Anthocyanins moderate liver histology, enzymes, glucose tolerance, fat pads with no side effects.

4. May Help With Cancer

May Help With Cancer

Anthocyanins – like most other antioxidants – may help prevent cancer.

Plenty of evidence from various types of laboratory and clinical trials suggest that anthocyanins, and foods abundant in anthocyanins, may have anti-cancer effects:

The American Journal of Clinical Nutrition published a study in 2009 which found that supplementing with anthocyanin resulted in a 13.7% increase in HDL cholesterol (the beneficial kind of cholesterol) while reducing LDL levels (the bad type of cholesterol) by 13.6%.

A more recent study evaluated the ability of black rice (an anthocyanin-rich food) to inhibit cholesterol absorption. Researchers concluded that black rice did lower cholesterol, at least in part thanks to the antioxidant anthocyanins, and so recommend black rice and similar foods for the prevention and treatment of high cholesterol.

When berries were studied, it was found that they may reduce the risk of heart disease in women, thanks to their high content of anthocyanins.

A study of 93,600 participants, carried out over 18 years and published in 2013, found that a high anthocyanin intake is associated with a reduced risk of a heart attack in young and middle-aged women. Researchers found that the most advantages (a 32% reduction in risk) were gained by those women who ate three or more servings a week.

Other research has found that these antioxidants protect the heart by reducing oxidative stress and inflammation while improving capillary strength.

Another way anthocyanins can contribute to a healthy heart is through the reduction of blood pressure – a significant contributor to cardiovascular disease.

While flavonoids have long been known to reduce the risk of cardiovascular disease, 2011 research showed that the anthocyanins in blueberries might work better than other flavonoids at keeping blood pressure low. Study researchers say that consuming foods containing anthocyanins is ‘a very achievable way of reducing hypertension’ (high blood pressure).

Eating a range of colourful foods is the best way to obtain the complete range of vitamins and minerals the body needs to thrive. The variety of vitamins, minerals, antioxidants, and phytochemicals in fruits and vegetables have enormous health benefits. Fruit and vegetables can be classified into five different colour categories: red, purple/blue, orange, green and white/brown. Each colour carries its own unique set of disease fighting-chemicals known as phytochemicals.

While this may or may not have the same effect in humans, one thing we do know is that anthocyanins are found in fresh fruits and vegetables. By adding ‘Purple Boost’ to your pet’s diet you will undoubtedly help them feel better!

These fantastic compounds may even protect your eyesight!

Anthocyanins can benefit vision by:

Lutein (“the eye vitamin”) in purple carrots also has eye health-protecting qualities. It is often used as a preventive treatment for age-related macular degeneration, cataracts, and retinitis pigmentosa.

In a French study, researchers tested 36 people for their ability to adapt to light and dark both before and after taking bilberry anthocyanins. For several hours after supplementing, they enjoyed a significant improvement in vision. However, the effect wore off within 24 hours.

More recent research found that people taking 50 mg of blackcurrant anthocyanins adapted better to the dark and had less eye fatigue than those in the placebo group. Those taking just 20 mg did not experience these benefits.

Although purple carrots provide many of the same health benefits as orange carrots, they also offer some additional nutritional benefits due to their high concentration of anthocyanins. Anthocyanins are flavonoid pigments that give many blue, purple, and black vegetables and berries their intense colour and strong health-boosting properties. Purple carrots contain up to 28 times more anthocyanins than orange carrots.

Purple carrots are rich in anthocyanins which are antioxidant compounds. Research has shown that the antioxidant and other chemical properties of these blue and purple pigments provide enormous health benefits, one being powerful anti-inflammatory properties.

Inflammation is the body’s response to injury. It works to heal wounds, but it can also play a role in some chronic diseases. It is the body’s way of signalling the immune system to heal and repair damaged tissue, as well as defend itself against foreign invaders, such as viruses and bacteria.

What does Anthocyanin do to your body?

Ask us A Question